The Praetorium and Roman Emperors in Castor 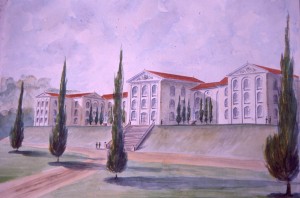 Did you know there was once, an enormous Roman building on the top of the Church Hill in the village of Castor?   We now call it the ‘Praetorium’ or Headquarters. The Praetorium use to stand just behind where Castor church now is and it was around six times bigger than the church. 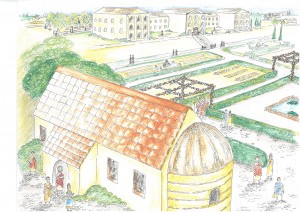 Hello my name is Constantine the Great and I am a Roman Emperor. I think I’m rather kind and loved by all my people. I have a daughter called Constantina and I son, also called who one day may become Constantine II.

Some years ago I was travelling in the province of Britain with my dad and his legions (including the IX legion Hispania), when unfortunately he died.    I was in the town of Eboracum when I got the news that my father was dead and I was declared Emperor.  Later I learned about Christianity  and decided to become the first Christian Emperor. I then declared that Christianity was not illegal in the Roman Empire. I have travelled around Britain quite a bit visiting the various towns and making sure that the taxes are being properly raised and sent back to Rome. When I go up and down Ermine Street I stop off at the various towns along the way because you can only travel so far in a chariot . I like stopping off near Durobrivae because there is a very nice local headquarters building high up on a hill nearby where I can look out over the countryside . A local official is there to look after my private estates in the flat lands to the east.

Hello my name is Constantina I am the Emperor’s daughter. I am the one of two children of my lovely family. I am only ten years old. I love going horse riding with my horse called Hazel. I live in a palace with my father I have two brothers and hundreds of slaves, although to be honest I don’t need them all! I was born on March the 17 and on my name day I get lovely presents like a tunic with silver thread or a new jewellery box. I usually wear a dress with brown sandals and of course, jewellery. I sleep in a lovely comfy bed and have lots of toys. I also get my slaves to prepare me a wonderful relaxing bath after I have been riding.

Hello my  name is Publianus and I work for the emperor as a slave and it is hard, hard work.  I hate it. I am 34 years old and I was living in Gaul when I got captured by the Romans about 20 years ago. There was a fight between the Romans and my tribe and they set fire to everything in my village and I had to run away with my family. I ran as fast as my legs could carry me, but  I could not run that fast because my legs were aching.. I was so happy to escape and I looked forward to living a free life with my family. However the Romans then captured me and I was made a slave and sent to the emperor’s household. I now have to go with him when he travels abroad –even as far as Britain!

Its cold and wet here –I wish I was back near Rome . Its a lot sunnier there!