Castor and the surrounding area which included the town of Durobrivae, is one of the important areas of Roman Britain.

At first, soon after the invasion there was a small fort guarding the bridge across the river Nene.  A small settlement grew up to provide the soldiers with anything they might need, as well as any travellers moving along the new road. In time the settlement grew into the  town of considerable size with industrial areas to the north and west. But that was down just over the other side of the river a mile or so from the present village but right next to the present A1.

But here in Castor there are important Roman remains as well, with a major Roman building on top of the hill behind the church which we call the Praetorium. 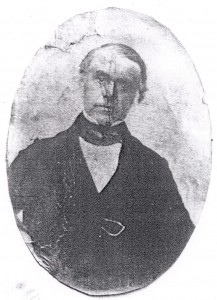 We cannot fully understand the Roman history of Castor, the town of Durobrivae, and the surrounding area without acknowledging the work of Edmund Artis who was born in 1789 and died in 1847.   He was a remarkable and talented man who worked as Steward for Earl Fitzwilliam at the nearby Milton Hall.  Artis had an interest in many things, painting, natural history and geology but he is most famous as an antiquarian – a lover of history.  While living at Milton Hall in the 1820’s he conducted an extensive series of digs and excavations of Roman sites all around this area. Before this time other amateur historians or antiquarians had typically searched for treasures or individual objects that they could study or display. Artis however used his skill as a surveyor and illustrator to do much more. He worked systematically to   uncover and record not just the objects that he found but also the buildings, the industrial remains, the roads, the cemeteries, indeed every aspect of Roman society that once existed here.  By looking at these things in their context and how things related to one another, he tried to understand how Roman society actually worked and what the lives of people were like.

He carefully drew the plans of the buildings and objects he found, engraved those illustrations and produced this wonderful book ‘The Durobrivae of Antoninus’ in 1828.

This book is a complete treasure trove for local historians because it shows many of the local sites around Castor that he found and locating for instance the large roman building on the site of our present church. It also includes beautifully coloured illustrations of the mosaics floors that he found in local villas. Because of the scientific nature of the way he approached his work and the skill he used to record it he is rightfully judged to be one of the founding fathers of British archaeology. Unfortunately the volume of text that that he planned to accompany these wonderful illustrations never appeared before he died in 1847.  We can be very proud of this local man however and of his contribution to our understanding of our own history.

It is perhaps right that he is buried here, in the churchyard of St Kyneburgha’s, so close to the roman remains that he must have valued so much.

Roman Remains, discovered on the site of a Pottery in Dec. 1822, in Normangate field, Castor.