A few houses along Ermine street grew into a town covering a large area with a wall around it. Much of the industry, with its smoke and smell was outside the town. The main road, Ermine street ran right through the town and there were gateways in the walls. We know from air photographs that there were all sorts of different stone and wooden buildings in the town. There were shops , workshops , big mansions and smaller houses for poorer people. We think there was ‘mansio’ or inn where people could stay, a forum or market place and some temples as well. There haven’t been any big archaeological ‘digs’ in the town in recent times, so there is a lot there to be discovered.

Where there was a Roman town today all it is, is just plain green grass. Over the years it has changed a lot. The town has gone because all of the soil and grass has grown over it. But you can still see the traces of Ermine street, running through the town and the humps and bumps on the ground that show where the town walls were.

Today our world is much different to the Roman times. We have our own baths they have to share theirs. We have pounds they had Denarii. So all of this shows that the life is a lot more different. We also have much better technology, such as computers, mobile phones ,motor cars , aeroplanes and electricity! 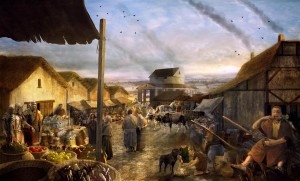 Hobby: Going to the public bath house to meet my friends.

Friends: 3 nice ones 2 weird ones.

Hello there. I’m Torano and I am totally rich! I live in Durobrivae in a nice house. My life is awesome and I have a great job – I’m a merchant ,basically just buying loads of pottery and other goods and selling it for a massive profit. Anyway, it’s a real pain having to walk for miles along straight roads to get from one place to another so I use my horse for long journeys. I wish there was a cool invention that could make the journey about as quick as a Torano tornado!

Going to the bathhouse is my thing to do at night because everybody else goes there in the morning and afternoon so it’s amazingly quiet and peaceful – just like me. Dormice are definitely 100% my favourite meal (though roasted songbirds are actually quite nice)! My bro Georgemous Maximus is my best member of the family but he is a bit annoying especially when he hits me several times when we’re going on a trip exploring the town. When I was little, I wanted to be a fierce soldier, fighting until I die but I never got around to it.

I am Georgemous Maximus and I was related to the family of Julius Caesar until he got assassinated. But I am not upset because he was a cruel man and being related to his family means I have got my important job in Britain. So I will tell you a little about me. So I have a son called Grumio and a brother called Torano. When me and Torano were younger he ran away and eventually came back after a year. I now have a great life with a lot of money and I live in a giant villa near Durobrivae I call it the Praetoruim where I live with Torano and Grumio alongside a load of slaves which cook my delicious dormice which Grumio goes to get every night.

A View of the Baths and Site of the Roman Buildings at Castor, west of the church.

Plan of the Roman Baths at Castor, discovered Nov 7th, 1821

A Mosaic Pavement, discovered at Castor, in 1821